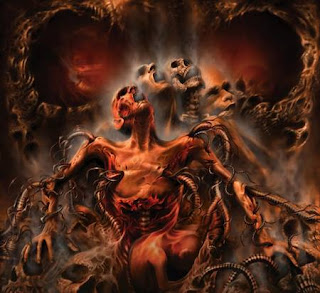 “I, Sister Faustina Kowalska, by the order of God, have visited the Abysses of Hell so that I might tell souls about it and testify to its existence… the devils were full of hatred for me, but they had to obey me at the command of God, What I have written is but a pale shadow of the things I saw. But I noticed one thing: That most of the souls there are those who disbelieved that there is a hell.” (Diary 741)

The Apostle of Divine Mercy – St. Maria Faustina Kowalska of the Congregation of the Sisters of Our Lady of Mercy

“Today, I was led by an angel to the Chasms of Hell. It is a place of great torture; how awesomely large and extensive it is! The kinds of tortures I saw”:

++++ “These are the Tortures suffered by all the damned together, but that is not the end of the sufferings.” ++++

“There are special Tortures destined for particular souls. These are the torments of the senses. Each soul undergoes terrible and indescribable sufferings related to the manner in which it has sinned.”

I would have died

“There are caverns and pits of torture where one form of agony differs from another. I would have died at the very sight of these tortures if the omnipotence of God had not supported me.”

No One Can Say There is No Hell

“Let the sinner know that he will be tortured throughout all eternity, in those senses which he made use of to sin. I am writing this at the command of God, so that no soul may find an excuse by saying there is no hell, or that nobody has ever been there, and so no one can say what it is like… how terribly souls suffer there! Consequently, I pray even more fervently for the conversion of sinners. I incessantly plead God’s mercy upon them. O My Jesus, I would rather be in agony until the end of the world, amidst the greatest sufferings, than offend you by the least sin.” (Diary 741)

For further reflection:
“Jesus reveals what happens at the moment of death – Messages (Book of Truth)”

“Prayer for Forgiveness of Sin – Jesus Please Forgive Me”
https://maryrefugeofholylove.com/the-warning-what-to-do-afterwards/prayer-for-forgiveness-of-sin-jesus-please-forgive-me/
Posted by a soul at 8:29:00 PM