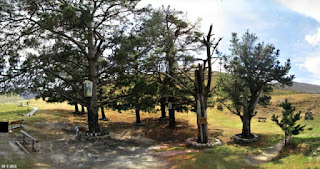 "The Pines at Garabandal"

Summary: The appearances of Mary, Queen of Heaven, took place between 1961-1965 to four peasant girls in a small, remote village of San Sebastian de Garabandal in the mountains of northern Spain.  These Marian apparitions are important because they stressed conversion back to God due to increasing sin in the world and neglect of the Most Holy Eucharist (the Precious Body and Blood of Our Lord, Jesus Christ), especially, among the clergy.  They took place during a time when the pope did not reveal the Third Secret of Fatima in 1960, as requested by Our Lady in 1917.  They also took place during the same time-frame as the Second Vatican Council, which was held in Rome, Italy, and introduced many modern changes to the Catholic Church.

At Garabandal, Our Lady spoke about four great events that will be witnessed in the future by many people.  They are: (1) The Great Warning–an Illumination of Conscience–given to every person in the entire world for their conversion back to God; (2) The Great Miracle–a supernatural event that will take place at Garabandal and will heal many people who witness it–it will be announced eight days prior to it happening; (3) The Great Sign–a supernatural monument that will be left behind at the Pines in Garabandal to prove the authenticity of the Marian apparitions; and (4) a conditional worldwide Chastisement–which is predicated on mankind’s response back to or away from God after The Warning and The Miracle.

Two Messages for the world were given by Our Lady of Mount Carmel at Garabandal, Spain

“We must make many sacrifices, perform much penance, and visit the Blessed Sacrament frequently.  But first, we must lead good lives.  If we do not, a chastisement will befall us.  The cup is already filling up, and if we do not change, a very great chastisement will come upon us.”

“As my messages of October 18 has not been compiled with and has not been made known to the world, I am advising you that this is the last one.  Before, the cup was filling up.  Now it is flowing over.  Many cardinals, many bishops, and many priests are on the road to perdition and are taking many souls with them.  Less and less importance is being given to the Eucharist.  You should turn the wrath of God away from yourselves by your efforts.  If you ask His forgiveness with sincere hearts, He will pardon you.  I, your Mother, through the intercession of Saint Michael the Archangel, ask you to amend your lives.  You are now receiving the last warnings.  I love you very much and do not want your condemnation.  Pray to us with sincerity and we will grant your requests.  You should make more sacrifices.  Think about the passion of Jesus.”